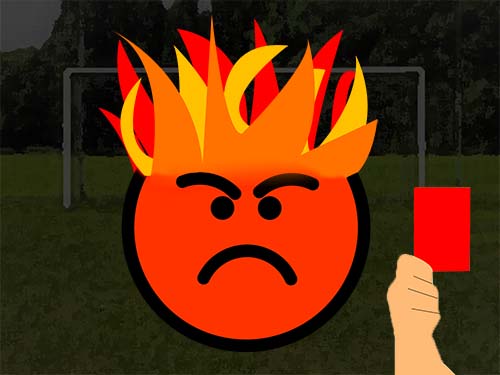 Whatever league you’re in, you’re bound to run into the occasional violent outburst from a player that can’t control their anger. From the junior leagues to professional leagues, there are always players that are known for this type of behavior, and it’s important you don’t let it impact your fellow teammates and your game.

In this article, we’ll go over a couple scenarios you might run into with these types of players and we’ll outline the best methods of managing this kind of response or personality. Tempers can flare even in younger players when hard challenges or late tackles are made, and a poor decision by the referee or linesman can cause extreme tantrums that you’ll have to watch out for.

Whether you’re a soccer coach or a soccer player, you need to put a stop to this type of behavior, especially when it’s a player on your team. Ensure your players are aware that they’ll be subbed off if they start to cause any issues, as the last thing your team needs is a yellow/red card from the referee. Make sure you’re constantly reminding your team not to get into arguments with the referees and not to try and get revenge for harsh or unjust tackles. Remind your team that the proper way to respond to these tackles is a nice nutmeg or goal, and that there’s no reason to resort to verbal or physical violence.

How To Deal With Angry Players On Your Team

Full concentration from your entire team is vital whether it be a playoff game or simple training. Ensure your team is aware of this from the start, and make sure to reiterate this during every opportunity. Before practices and games, ensure you’re taking responsibility for your players/teammates by openly communicating with them and setting clear expectations.

During pre-match talks, you’ll want to reiterate that any unsportsmanlike conduct will result in a substitute, regardless of performance. The last thing your team needs is to play with a man down, so make sure you’re committing to punishing this type of behavior whether it be from the star striker or the coaches son. If you’re concerned that a teammate might do something stupid, make sure you communicate with your coach and try to come up with a solution that avoids any conflict. Starting these types of players on the bench can sometimes force them to calm down and help the team stay focused on the important game at hand.

If a player consistently causes problems and neither coaches, teammates, nor parents can calm them down, it might be in the best interest of your team to drop them or suspend them. As much as it sucks to lose a player from your team, it sucks even more when they get red-carded and the whole team has to suffer due to their behavior. If there are multiple hot-headed players on a team, dropping one of them can send the message that this type of behavior is completely unacceptable. Players must learn from the mistakes of others, and if they see their teammates get dropped due to their behavior on and off the field, they’ll likely calm down and realize the mistake in their ways.

How To Deal With Angry Players On Opposing Teams

Well, simply put, you can beat them.

Hot-headed players tend to get even more angry when they get beat and when they aren’t performing well. This can cause them to make more mistakes and become more selfish on the ball that will result in an overall negative impact on their team. Take advantage of this as best you can by following the steps below.

There’s nothing that makes a player more frustrated than when they aren’t able to perform. When a player gets angry, however, they’re more likely to make simple mistakes that can cause them to lose possession of the ball. It’s easy to take advantage of this by man-marking fiery players. You’re likely to cause them to get even more angry, and thus make even more mistakes that you can take advantage of.

If man-marking a fiery players results in any violence or aggression, make sure you let the referee know. Ask the referee to watch out for them as they’re fouling you and you’ll be good to go.

While you’re man-marking them, make sure you’re challenging every 50-50 ball, and that you aren’t letting them beat you. Don’t dive in, and wait for them to make a mistake. Once you see them take a touch that’s a bit too far, challenge hard and don’t stop until you’ve won the ball back. This might take a bit of aggression, but don’t let them beat you, and they’ll be frustrated beyond belief.

While you have the ball, the opposing player will likely want to get revenge on you for man-marking them. Make sure you stay calm and that you don’t get too fancy on the ball. Play safe passes, and make sure you aren’t getting worked up. If you keep getting fouled, once again make sure the referee is aware. If you need to, make sure the sideline referee is watching as well.

Remaining calm is tough when someone is constantly fouling you, but the last thing you want is to stoop down to their level. Trust that the referees will do their job right, and don’t let them impact the way you play your game.

In conclusion, there’s a few things you can do to control fiery players whether they’re on your team or on the opposing team. If they’re on your team, make sure you communicate to them that their behavior isn’t acceptable and that they’re causing the team as a whole to suffer. Make sure you communicate with your coach before any trouble arises that you want to see him or her take action by benching the trouble-making player. If all else fails, suspend the player or kick them off the team, as they aren’t worth the downfall of the entire team.

If the fiery player is on the opposing team, take control of the situation by man-marking them and causing them to make simple mistakes, and remaining calm when they attempt to foul you until the referee steps in.

There’s no place on the field for these types of players, and they take away from the positive experience of those around them. Make sure they aren’t impacting your team by being the bigger person and taking control of the situation. Don’t stoop down to their level and let them learn from their mistakes, as some players simply aren’t aware of the damage they’re causing with their actions.