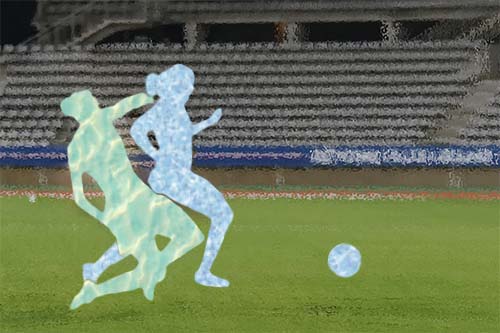 Whether you’re a forward, midfielder, defender, or even a goalie, as a soccer player you must be a skillful defender and know how to tackle effectively. This means that you should be able to think ahead of the opposition and play intelligently to force your opponent to make errors before swooping in and tackling cleanly and effectively.

The best defenders in the world, including the likes of Sergio Ramos, Virgil Van Dijk, and Gerard Pique are great at reading the game and can foresee when an attack is being set up. They can then position themselves into place to block forward runs and stop the play before it becomes a threat at goal. Proper positioning takes years of daily practice and can be improved by watching live games and simply playing the game. Proper tackling, however, is a key part to the puzzle that needs to be taught early and often. All soccer players need to be taught how to tackle correctly and effectively to properly dominate the opposition and ensure success.

In this article, we’re going to cover the three primary tackles that every player should know and master. These three tackles are the block, side, and sliding tackles. As a beginner, the most important type of tackle is the block tackle, as it’s the simplest and safest hard tackle.

The block tackle is the easiest tackle to perform on a striker and is useful when the attacker makes a direct run at the defender. It is particularly helpful near the penalty area where space is at a premium and it is essential to win and clear the ball.

If done properly, the block tackle will end an attack immediately and help the defending team gain possession of the ball. Defenders who want to win the ball have to first stop the progress of the attack by getting goal-side to the opposing offense, and then performing the tackle once the opponent has lost their momentum.

In order to perform this tackle, a defender must stay low with their knees bent, lean forward to the ball, and ensure their non-tackling foot is planted firmly on the ground. After this, you need to make sure that your tackling foot doesn’t just impede the ball but goes fully through it. The position of players’ bodies says a lot about their attitude to tackling. Timid tacklers may hold their bodies upright and their shoulders may be leaning back, placing them away from the football. This is bad positioning as the forward can easily maneuver to the other side of the off-balance defender and quickly accelerate towards goal.

In contrast, it would be correct for a player to lead with the shoulder opposite the tackling foot. Their center of gravity should be low and they should be willing to go through the ball.

The Side Block Tackle

If a defender is chasing after being beaten, then an efficient tackle is the side block tackle. Although a sliding tackle can also help to take the ball from the attacking side, I personally prefer to try the block tackle as it allows you to stay upright for longer. Sliding is a last-ditch alternative if the side block proves ineffective.

There are four aspects of the side block tackle:

Sometimes this type of tackle will allow the ball to get away, so you must emphasize that players should remain upright.. With luck, the break will favor their team, allowing them to start an attack. However, the ball may still break towards the attacker. If the defender is upright, they can chase, which they can’t do from the ground.

If possible, it’s always best for defenders remain on their feet, avoiding the ground unless it’s unavoidable. That’s because if they lose the ball and are on the ground, then they’re not in play and forced to watch from the ground. Sometimes, the only way to completely stop an attack is to use a sliding tackle, but it needs to be done correctly and carefully. All players should know and practice this tackle, even if they don’t end up using it too often.

There are three main parts of a sliding tackle. These are the chase, slide and sweep.

So these are three types of tackle that you should include in a training session to make sure that your players are ready to handle anything that the opponents dish out. No matter how much you work on tackling, it is essential that your players know that they must also be determined to win the ball. This means they must summon their nerve, courage and enthusiasm when they attempt to take the ball. Determination and commitment are both crucial aspects to carrying out the essential hard and fair tackle.